There is a term of men’s masculinity which is called Ninkyoudou(任侠道) in Japan, and Ninkyoudou also represents consideration for other people as they cannot leave behind someone who is in trouble for their justice even if they have to sacrifice themselves. Currently, there are several groups of Yakuza, which is a name for the Japanese mafia. Furthermore, there are so many gang groups and mafias in the world. We have an image for those antisocial groups that threaten people and rob money or stuffs from someone weaker. Currently, Ninkyou is a term for those Yakuza groups. They were supposed to have the mind of helping weaker people, but unfortunately, the activity and thought that Yakuza members have is in contrast to the Ninkyoudou now. In the period when people esteemed Ninkyoudou (mainly Edo period ~ Meiji period), there were people who were on the summit of the organization, corresponded to other groups, and lead their subordinates. Those leaders have been called KUMICHO.

The reason why he put the title KUMICHO on this art is that he wants the Ninkyou-spirit to exist today around our society. Japan is the only nation that has experienced being exposed to the atomic bomb radiation during the final stage of World War 2. Moreover, on March 2011, a significant earthquake and tsunami hit the Tohoku region in Japan, and the earthquakes destroyed one of the nuclear power plants that lead to the radioactive contaminant. In the world, there are also unexpected natural disasters like hurricanes. Some countries are still fighting with their hostile country or even domestically. We are always living with such menaces, and people are gradually losing their energy, vitality, and future as they live through it. It does not seem to end even in receiving this kind of bad news. Especially for him, since he experienced the Tohoku earthquake, the disaster changed his value and lifestyle that he had had until that day. Therefore, the experience has been strongly inciting and motivating him to create those wonderful arts and he hopes that his art encourage those people who lost their motivation to confront their difficulties. “Don’t give up”, ”You are not alone”, “Tomorrow will be brighter”. He has been sending those messages to viewers and he will be glad even if a few people receive those messages and are encouraged by the art.

The IREZUMI, covering his whole body, is a symbol of patience. These sorrowful eyes in poker face represent that he is carrying several pasts. If you look at his feet, you realize that he does not have any fingers. In unique and painful custom of NINKYOU(currently YAKUZA), they cut their own finger with a knife to show their respect toward hostile groups when they wanted to finish fighting with their opponent. This custom is called YUBITSUME( 指詰め), and his feet, thus, representing the perfect shape of NINKYOUDOU. The model of this huge and brave dog is Tosa-ken that is mainly considered as dogs for dog fighting in Japan from a long time ago, and the flower in the IREZUMI is the Chrysanthemum that is known worldwide as a common flower that mourns for death. Zensui depicted the chrysanthemum to show the respect for the life and death of Benkei(弁慶), who is an ancient historical Japanese person. In Japanese history, Benkei was a rowdy fellow in his childhood. When he became an adult, he started making an effort to plunder 1000 of the samurai‘s swords after defeating them. He achieved 999 swords, but he was beat by the 1000th person Ushiwakamaru (牛若丸) (a.k.a. Yoshitsune Minamotono: within the dynasty Heian period). From that time on, he worked for Ushiwakamaru as a servant during his whole life. On his deathbed, hostile armies tried to attack Ushiwakamaru, and Benkei struggled to protect Ushiwakamaru from the attack. He was very strong but the enemies were too many for him to deal with. Eventually, Benkei got countless arrows on his whole body, but the strength of his soul that wanted to protect Ushiwakamaru kept him standing even though he was already dead. This is the legend of Benkei and Ushiwakamaru. Many people respect and have been influenced by this legend. Zensui is one of them, and he concluded that their ways of life are suitable to describe an impression of KUMICHO.

That would be the best if we could have strong and unbeatable spirit every moment as Benkei, but sometimes we must confront the huge wall we have to get over. In short, the message that Zensui wants to send us through this art is “Stay on your feet! Be confident as KUMICHO!” 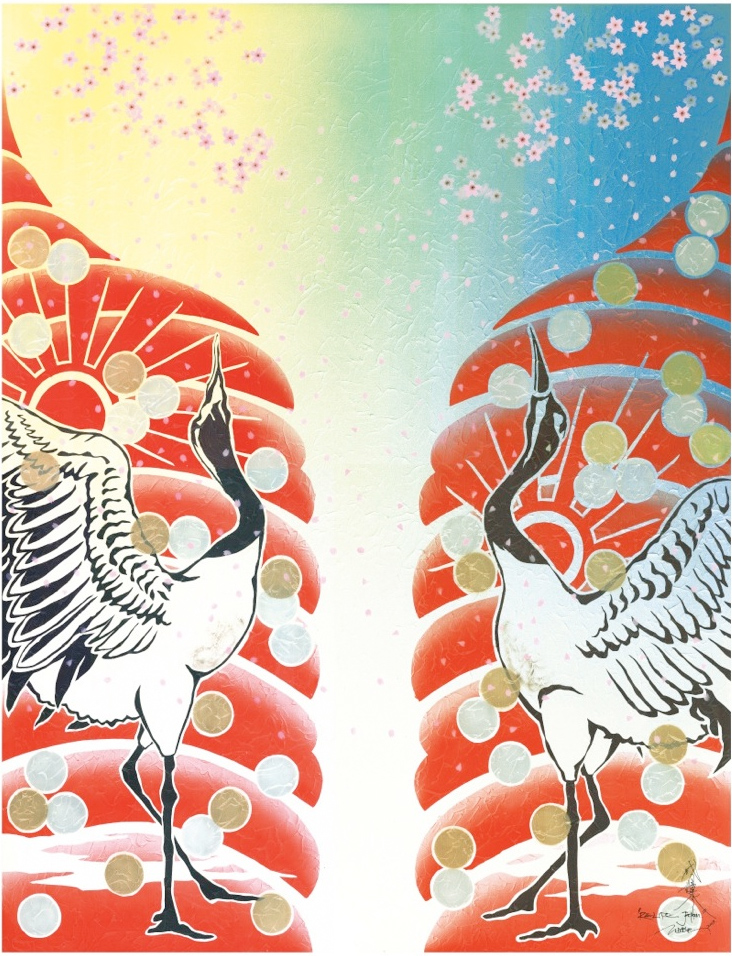 In 1976, Zensui was born in Nagoya Japan. That was a time when that generation of children learned about the history of wars in their textbook in school. He had spent 30 years of his life without any significant trouble, and he was thinking that there would be no fatal incidences or natural disasters. There are wars between countries or domestically, but he ignored it as it being just other people’s affairs. He would never think those kind of disasters would come to him. However, on March 2011, that was the first time his generation confronted the difficulty of many people getting confused and losing their families and homes. That was literally a picture of hell, Zensui said. The Touhoku earthquake marked magnitude 9.0 that is the largest earthquake in Japanese history. And even in the world’s history, that earthquake placed 4th as the largest earthquake in a century. In his life, that was the first time to grieve and he could not stop crying. Since that day, something changed his way of thinking about those news, people, and countries in natural disasters or wars. The experience enabled him to consider about those disasters from the victim‘s point of view. The feeling that he never wants to suffer has remained, and it will never go away from in his mind.

As you can see, this art is to pay a tribute to the victims of 3.11 Tohoku earthquake. He formed this work as to send his messages of “encouragement” to everybody that has suffered and is mourning for someone who they love.

These cranes are depicted as they are looking at the sky and talking with someone. The visual for these cranes is extremely intimate to Japanese people, and this visual had been used as a picture on Japanese paper money. Originally, the crane’s habitat was Hokkaido Japan, and Japanese government put the picture of cranes that Japanese photographer took in Hokkaido on the currency. After finishing this work, Zensui asked himself “These cranes seem that they are trying to tell their messages to people who are left in this world. What they wanted to tell in this beautiful gold and silver color of cloud?” “We have got to get over this sadness to do the duty we got for living.” Every single moment he sees this picture, he hope that everyone gets his message and feels in the same way as he does. “It is thankful even if we just live peacefully like these cranes.”

Hope our whole world will be embraced by love and peace. 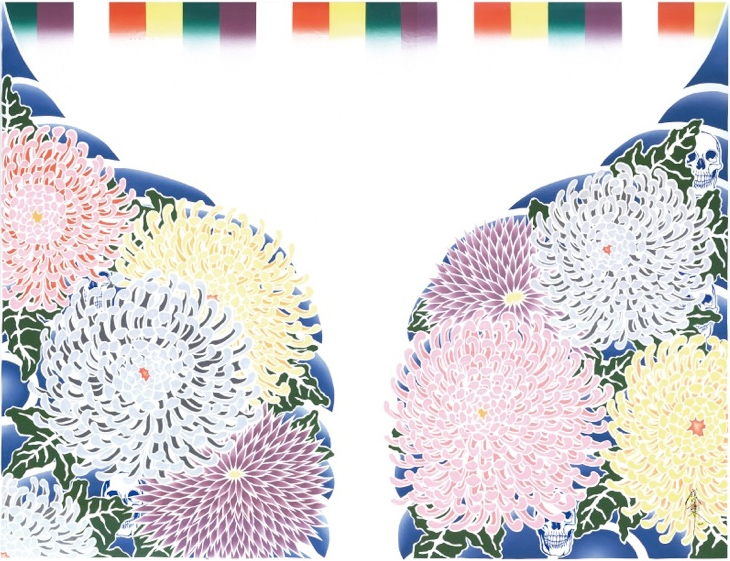 The motif of these exuberant flowers is the world widely loved special flower “Chrysanthemum.” The reason why this flower is special is that people in most countries use this flower for funerals. Also in our country Japan, people always have the flower around them when they face someone’s death. For many Japanese people, the chrysanthemum is a special flower for sending someone off to heaven. Of course, it is mournful to say good bye to friend or family, but people cannot live forever. Zensui says “One day, there will be the day my people give the chrysanthemum for my farewell. At the time, I don’t know if I will be able to watch my people warmly”. The belief of a life after death is different depending on the custom of the country or religion. There are several types of hypothesis about the life after death, but it is just a people’s imagination. Zensui says” In any way whatsoever, all I need is my people come to meet my last and talk and laugh about my story in a lot of chrysanthemum as we use to do.”

Zensui imagined about his own funeral, and this work contains his message how he wants to be sent to the afterworld by his family and friends. When people become adults, they gradually stop hanging out with their friends, but if he can provide the time that his friends can relax and smile even if it will be my funeral, that is going to be great success, Zensui said. It is hard to imagine my death, but family, friends, and other people give me chrysanthemums. I will be happy if I can see my people, restfully, smiling from behind the chrysanthemums.